Parabolic SAR means Parabolic Stop and Reverse which was developed by J. Welles Wilder, Jr. This tool is also known as a trend-following indicator. It is used to define signals of potential reversals of price direction. It is also used to set the trailing stop in order to determine the entry or exit points based on prices are staying in or out of the parabolic curve. Parabolic SAR should only be used in trending markets to stay within the trend or exit before the trend changes.

This indicator also offers great flexibility while trading in the market. It can be applied to trade any kind of asset: Forex currency pairs, stocks, options, and futures. Besides, this indicator is also a good match to all sorts of timeframe charts available within the MT4 forex trading platforms.

How to set up Parabolic SAR on Metatrader 4?

Since Parabolic SAR is a built-in indicator of Metatrader4, it is quite easy to set it up on the MT4 charts. Just follow a simple 4-step process in order to get done with the Parabolic SAR set up:

Parabolic SAR draws itself by parabolic curves made by a series of ‘dots’ up or below the price candle. When a trend is high, parabolic SAR appears below the price action and starts to move up with an upward acceleration of dotted curves. When the market is trending down, the curve plots itself above the price, starts to move downwards, and accelerates more with the fall of prices. Every dot of Parabolic SAR represents the dynamic stop level of the current trend as well. Therefore, it helps you to determine and update the stop loss position of your trade entry according to the changes in price actions.

Besides determining the stop positions, this indicator can also be used to define market trends, trade signals, and filtering trade signals generated by other trend-following indicators which we’ll discuss throughout this article:

Buying with the bullish trend signals 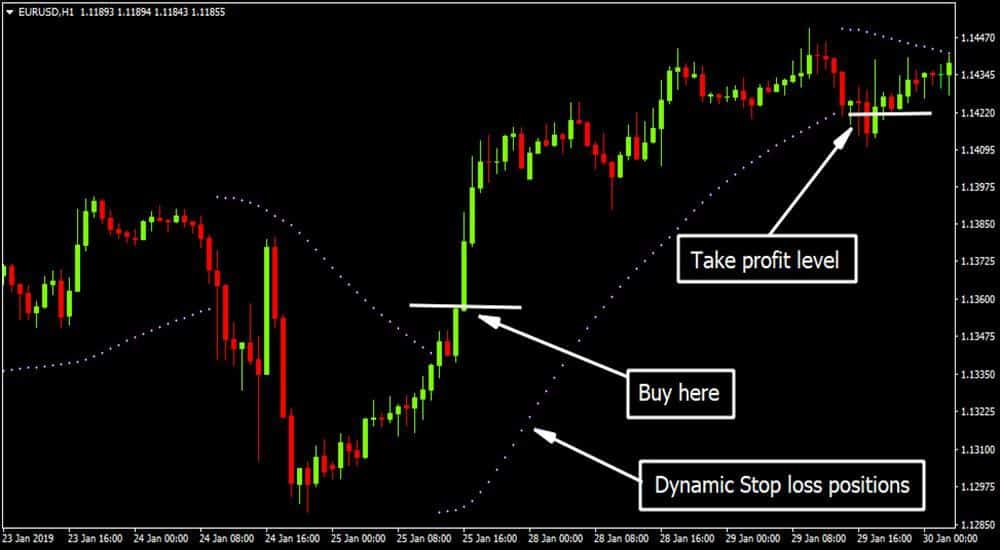 Selling With the Bearish Trend Signals 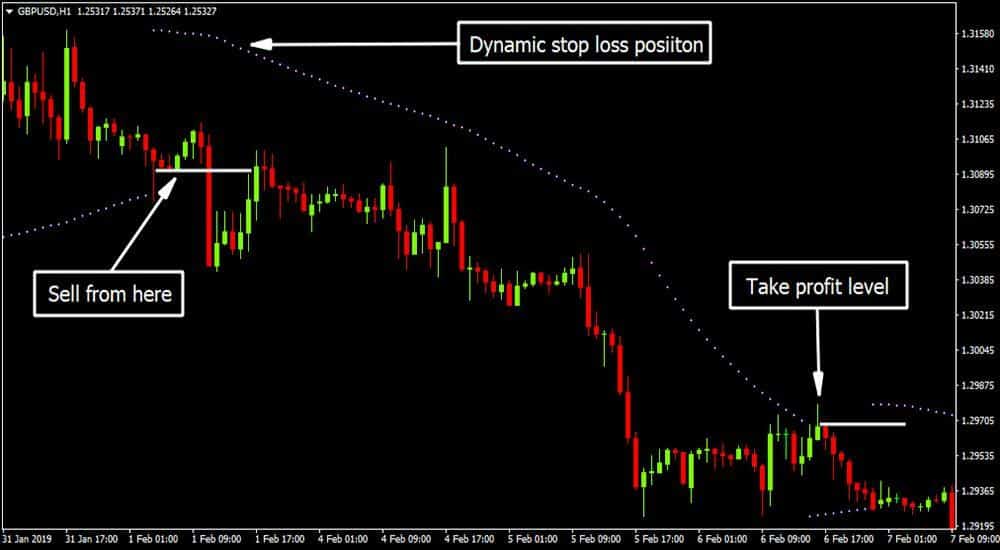 Sometime, Parabolic SAR may deliver frequent signals because of the bearish momentum of price. Frequent signals from a single indicator increase the chance of false indications. For this reason, many traders use a second indicator for better confirmation of the trade signals.

Here is an example:

In general, if you’re using two indicators at a time in the same chart, both indicators should be generating the same trade signal at the same time. If you encounter two different signals at the same moment, that means it is a no-trade situation and it’ll be wise to wait for better confirmations. 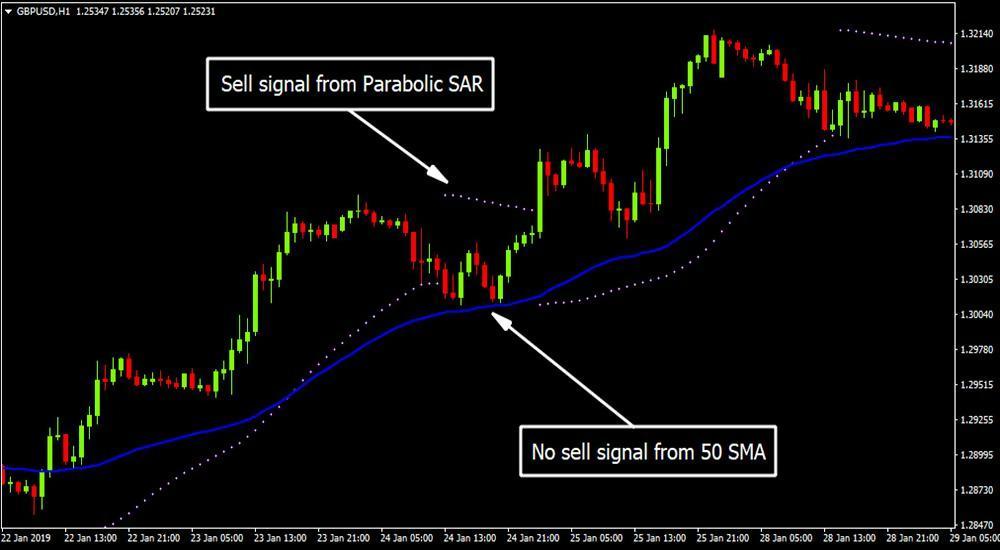 This is another hourly GBP/USD chart. We’ve added a 50-day Simple Moving Average (SMA) along with Parabolic SAR in this chart. As you can see, in the middle of the chart, Parabolic SAR had given a sell signal. However, the price had failed to go below the SMA level thus, it is a no-sell signal from the 50 SMA. If you take a close look at the scenario, you’ll notice it’d be a failed trade if you sold according to the Parabolic SAR sell signal. This is how a second trend-following indicator can save you from the false signals generated by the Parabolic SAR.

Now, let’s see how Parabolic SAR with 50 SMA can help you to define trade signals with a better probability of success: 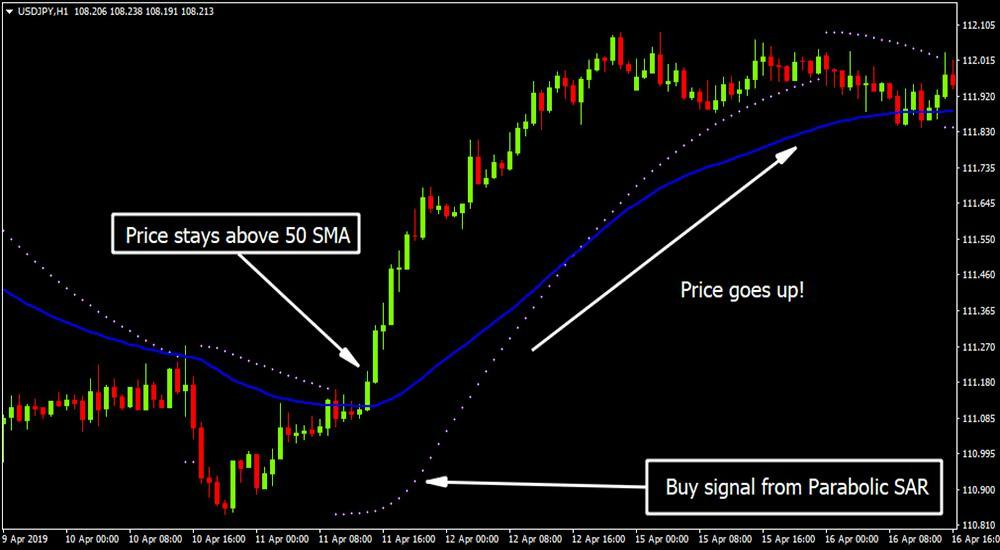 This is an hourly chart of Australian Dollar vs US Dollar and we’ve added the same indicator (50 SMA) along with Parabolic SAR as like as our previous example. At the initial stage, the price was moving below the 50 SMA and according to Moving Average rules, it means a bearish trend signal.

Parabolic SAR is a versatile indicator. It helps traders to define the current market trend, trend reversal, stop-loss positions, and possible trade exit levels. Besides, it can be added to any other trend-following trading indicators or strategies for increasing the better probability of success and enhancing the trading performances.

Furthermore, Parabolic SAR is easier to understand and offers greater simplicity of use compared to other trend-defining tools in the market. This is why this indicator is widely admired by newbie traders besides experienced professionals around the world of financial markets.

If you have any question regarding the parabolic SAR indicator, leave me a comment.